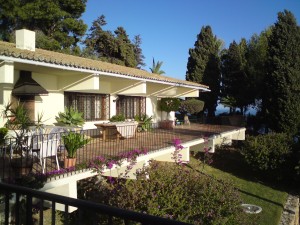 The October 2011 European Institute of guitar making course has just been completed by six students from around the world. After twenty two days of  intense guitar making, four flamenco guitars and two classical guitars were constructed according to the Spanish tradition with wonderful results and really fine instruments.

This culminated in an emotive end of course concert in the historic house of Andrés Segovia (world famous father of modern classical guitar). Andrés Segovia lived in La Herradura for many years until he passed away leaving a wonderful legacy for the Spanish guitar for others to follow.   He endorsed the International Classical Guitar competition (Certamen de Guitarra Clasica Andrés Segovia) held annually in La Herradura .  We thank Dr Anthony Morton for his generosity in opening his home to the European Institute of Guitar Making.

Each students’ guitar was played by professional musicians, Dale Harris, Albert Nuijten and Mark Shurey prior to the presentation of their European Institute of Guitar Making Diploma by Stephen Hill, director of the Institute. Stephen said; “I feel proud to be witness to the birth of these fine spanish guitars. Each one unique, reflecting the character of each of our wonderful guitar making students”.

After the concert and ceremony, a fiesta was held back at the workshop in La Herradura, with great food, live music and a chance for visitors to see the guitar making workshop.

We are now preparing for the next guitar making course in May 2012 which, we are pleased to say, is fully booked.