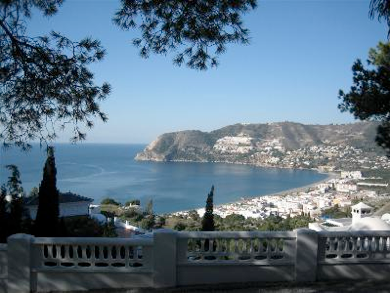 Our main Spanish workshop is located in the typical Spanish village of La Herradura on the Costa Tropical, in Southern Spain, one hour from Malaga with its international airport and one hour from the city of Granada.

The beautiful bay of La Herradura is one of the prettiest bays along the south coast of Spain, shaped in a horseshoe from which the village derives its name.

The relatively unspoilt village of La Herradura presents a typical disorderly Andalucian aspect of white-washed buildings, climbing the gentle slopes of a small hill leading up from the beach.

The village and bay are framed by a backdrop of spectacular mountains forming part of the Sierra de Almijara. These mountains help to protect the area from the cold northern winds and create a microThe sheltered beach is a 2 km strip set between the natural headlands of Punta de la Mona and Cerro Gordo and is lined with outside cafes, bars and restaurants.

La Herradura has a good selection of shops, small supermarkets and the bonus of a daily market with fresh meat, fish, fruit, vegetables and of course, a guitar maker!