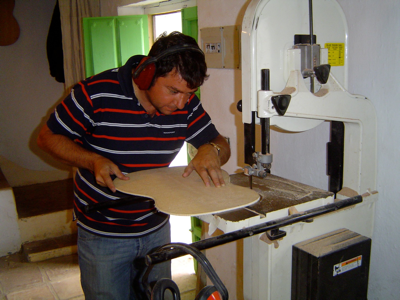 Made a flamenco guitar in spring 2007 in the El Rescate workshop along with the late Frank Watson.

"I had previously tried to build a guitar from a kit following a Santos Hernandez guitar plan: I was about 80% of the way through this project when I took the guitar building course with Stephen...

The course took place in the delightful setting of El Rescate, a small hamlet in the hills a few kilometers from La Herradura where Stephen previously had his workshop.

Stephen teaches with enthusiasm and an understanding of the students needs, offering constant encouragement to overcome the hurdles faced along the way...of which there were many.

He shares his vast knowledge and experience in a manner that draws the student into the whole process from wood selection to the nerve-wracking initial stringing up of the instrument. I felt at ease and comfortable under Stephens guidance and gained confidence with my own abilities as the course progressed.

The result of this course was a guitar built by my own hand to a standard which I did not believe was possible; and a skill set that will allow me to continue with this fine craft. This was not a 4 week holiday...be prepared to work long hours to get the best out of the course. I would recommend this course to anyone and everyone intertested in guitar building.

I continued to build guitars when I returned home after the course. The soundboard of my first 80% completed project provided a couple of sound-hole reinforcements, and the neck a few sets of wedges for the neck joints of future guitars.

The fingerboard was rescued and the rest provided the basis for a good BBQ - sorry Stephen, I know I said that I would try and complete it but the quality was so poor compared with what I had just experienced it could not be rescued."